skip to main | skip to sidebar

Here's the theory. George Dement Robey and family moved from Port Charles, MD to Lincoln Co, NC in 1799, the year our J.C.'s Robert Roby/Raby was born. Census data from Lincoln Co shows an infant in the household that next year, as well as an adolescent, and multiple adults. J.C. has located a website with a chart for George Dement Robey and we receive an update from the site owner, Jim, but no specific census data. So J.C. spends the day at the state library in Raleigh and meanwhile Jim's curiosity is piqued and he pours over Heritage Quest census files; they cross-post in emails.  Doris is volunteering this day at the History Center near her in Texas. I'm still working for a living, but scan the emails and attachments with great curiosity.

J.C. notices that the children of G.D.Robey are listed by their middle names in the census. He has no other name for his Robert, but yes indeed, Geo. Washington Raby II b. 1836 is listed as "Washington Raby." Another soft connection. Or maybe just human nature to shorten such an august identity to a simple "Wash." In 1860, age 23, Wash and his young family are in Catawba Co, Hickory Twnship. Ten years later, Robert Roby is there, too, but Wash has moved back to Caldwell Co by then. Maybe that's a clue. The Civil War creeped in then and Wash enlisted from Caldwell, I found, and I got completely distracted by that story. Captured, trekked to Illinois, imprisoned, exchanged, and saw a little more of the world before returning three years later. Odysseus. Cold Mountain.

On other fronts, the Lincoln Co Register of Deeds replied to my request for a copy of a birth certificate for Geo. Raby of 1810. No birth records are available in NC before 1913. Wow. I want to live in a country like that.

Raby: The Team Zeroes in on Lincoln Co.

J.C., retired civil engineer living close to the Raleigh-Durham Triangle but connected by his youth to western NC, is tapped into the LDS files and convinces us to focus on Lincoln Co. It's something of a leap. The 1830 census shows ROBY boys living near a George who's immigrated from Maryland and the ages and the names are a reasonable match. We really don't have any other viable choices.
Doris: She keeps the pulse of all the free message boards and builds relationships with other researchers like J.C. and James and Norma (who seems to divine where the action is headed).  Doris addresses these gentlemen as Mr. and taps into me with updates and calming, no-nonsense reassurances we're on the right track with J.C.'s ideas.
Mr. Miller: He lives in the target zone. He has published an article on the sons of GWR and Lydia Bentley based on the tombstone inscription that's now been torn down and replaced with a "modern" little rectangle, too small to include the previous descendant data. He drives to these cemeteries and photographs and inquires and knows the difference between a Will and a Settlement record.
Me. I tell stories. I think I'm the teenager on the team. And lose it when I discover that the USGenWeb census archive has disappeared and probably been sold to whom, Ancestry? I run a website database and try to keep it current and find the right buttons for sorting the finds. I reread the bible of my great aunt's published records, and wish I'd taken that trip to Columbus to rifle through her boxes of donated information before the college destroyed them. I file the request online for a copy of a birth certificate.
And we're off ! Four loosely-related descendants of the long lost George Washington Raby b. 1810 somewhere.

So I start with what used to be a public search of the database of US marriage records by state.  Surprise: In the last few years, free online access to personal history documents disappeared. See Links below for my running fury on the new corporate ownership of my family history. 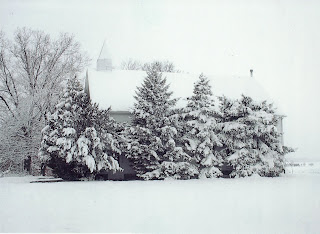 The little white-framed and steepled church that sat at the edge of the Durfee-McCormick-Prowell land is gone. As the congregation dwindled, a decision was made to tear it down rather than let it deterioriate.  The church bell remains, I'm told, and perhaps will become a memorial. Cottage Grove Township, Harrisburg, Saline Co, IL.